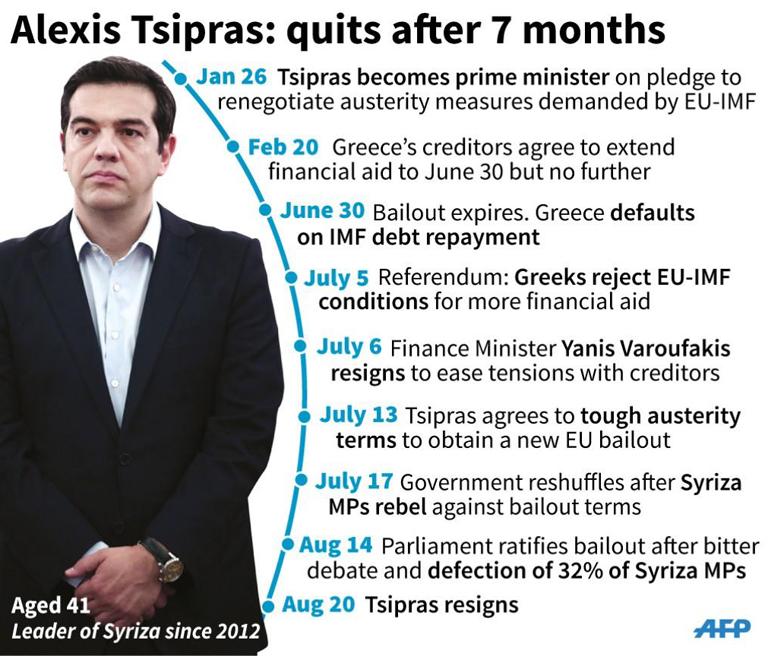 “I put under the judgement of the people everything this government achieved, or failed to achieve, all of my actions and decisions as a Prime Minister so far,” Alexis Tsipras said on his address to the Greeks, resigning and asking for the Greeks’ renewal of their vote to him, by announcing early elections after 7 months of this governance.

By his address to the Greek people, the prime minister, Alexis Tsipras announced his resignation to the President of the Republic, so as to request the renewal of the people’s verdict.

Starting his address to the Greek People, the Prime Minister underlined that everything that has been achieved by this government so far was due to the determination of the Greek people to his govt, for which Alexis Tsipras is asking for renewal by the early elections which are probably going to take place on September 20th, as soon as most of the Greeks are going to be back from any vacations that could possibly have made ( broken , financially, most of the Greek households)

“Today, the difficult stages that we have undergone together all this period through, come end with the final ratification of the agreement with Greece’s lenders and the disbursement of the first tranche of 23 million billion euros,” Alexis Tsipras noted, adding that “the economy will breathe,and the market is going to find a rhythm.”

Alexis Tsipras did not hide that there is still a long way to go through, and said: “This is not the end, but may be proved to be the beginning of the end of this situation.”
We did not achieve the kind of the agreement we would like to get”

“I want to me it clear, I want to be absolutely honest with you. We did not get the deal we wanted. In this battle we made concessions.The agreement we brought, given the correlation of the  circumstances, was the best one could succeed. It is agreement we have to stick to. But we will continue giving the battles to minimize its negative consequences, ” the Greek Prime Minster said.

Tsipras also commented on his govt. achievement during the negotiations to deter horizontal cuts by the agreement and talked about some of the advantages of the third memorandum.

“On this very moment,Tsipras said, we have currently an approved three-year deal with assured funding. The

“From this moment and on, I submit my resignation and the resignation of the government. The popular mandate which I took on January 25 has exhausted its limits”

Prime Minister Alexis Tsipras will propose holding snap elections on September 20, government sources said on Thursday, adding the premier is having separate telephone conversations with the leaders of the opposition parties to discuss the issue, ANA-MPA wrote.

Τhe sources also said the government’s aim is to swear in a caretaker government on Monday.

At the end of a bruising seven months of negotiations with Greece’s international creditors, the prime minister eventually signed up to a deal that many in his party view as a U-turn on the anti-austerity platform that swept it to power in elections last January Tsipras has insisted that accepting creditor demands for further tough reforms was the only way to ensure his country remains in the eurozone, which is a key demand among the electorate according to opinion polls, the Guardi wrote, late Thurssay night.

Syriza is now thought likely to formally split. The leader of its dissident Left Platform, the former energy minister Panagiotis Lafazanis, announced last week he intended to form a new anti-bailout movement, accusing the government of capitulating to the “dictatorship of the eurozone”.

Tsipras won parliamentary backing for the tough bailout program last week by a comfortable margin despite the large-scale rebellion among members of his ruling leftwing Syriza party who count now at nearly one-third of whose 149 MPs either voted against the deal or abstained. Since the end of January25 that brought Tsipras’ left-wing party ti government Syriza governs in a coalition with the right wing anti-austerity party, the Independent Greeks (Anel).

The revolt by hardliners angry at what they view as a betrayal of the party’s pledge to fight austerity left Tsipras short of the 120 votes he would need – two-fifths of the 300-seat assembly – to survive a censure motion and he was widely expected to call a confidence vote this week or next.

So why is he doing it and why is he doing it now? the Guardian asks on is recent article . Even polls at this stage in the game cannot be guaranteed, Guardianrticle commented . Until July, Tsipras was the undisputed leader of the political scene, hovering over it with deft deployment of canniness and charisma.

After the country’s latest rescue – and the onerous terms the young prime minister has agreed to – his popularity ratings will surely have been dented. In a matter of weeks he has lost more than a quarter of his own MPs, radicals who not only feel he has betrayed the cause but will campaign as the only leftists now left to carry the anti-bailout flame.