“Greece is in a triangle of insecurity – the three vertices of which are Libya, Ukraine and the Middle East – stressing that Greece has its own stabilizing role in the region”

Expressing his concerns for  Greece’s safety, the regions’ stability, and European unity, the New Greek Minister of Foreign Affairs, Mr. Kotzias underlined the area’s potential threats, at an extraordinary meeting of the European Foreign Affairs Council, in Brussels on 29 January 2015 which focused on deterioration of the security situation in eastern Ukrain. Minister Kotzias posed the questions in the case of Greece’s destabilization that could be generalized, he enphasised,  in a region that extends from Russia and Ukraine to North Africa and the Middle East.

“The main thing we wanted to be removed, and for which we fought for two hours – half of the time we were in the Council was spent on this issue – was the proposal for new sanctions. This was certainly a difficult negotiation. Unusually for the Council of Ministers, many Ministers spoke two, three or four times. The phrase providing for the new sanctions on Russia was removed. We explained, in my intervention, that the sanctions are not producing results, as sanctions – as is apparent from a number of countries, including Iran, Iraq and Cuba, as well as in the case of Russia – have not averted what they supposedly want to avert”, said  Niko Kotziast foreign and Greek correspondents .

“We called on the Council of Ministers to think strategically, and not just with regard to today, about what the precise goal of our policy is on the issue of Ukraine and in Russia. That is,

whether we want a broken Russia, a state of affairs that would, however, mean a lot of pain for the whole of Europe”

He also called on his collocutors to consider the domino effect that the measures they take might have, and asked for the introduction of a new general strategic debate on that issue.
Foreign Minister Nikos Kotzias expressed the Greek government’s deep concern at the attacks on innocent civilians. Mr. Kotzias referred in particular to the situation in Mariupol, where 160,000 Ukrainian citizens of Greek origin reside, noting that, to date, we have unfortunately counted six dead. He underscored that there is a need for a more secure environment, for a ceasefire based on the Minsk Agreements, and for withdrawal of heavy armaments, adding that, within this framework, it is vital to engage Russia in the search for a solution.

Germany and France supported Greek positions, wrote the neurope.eu, considering, explains the article, that Greece is right, and submitted an amended resolution on Ukraine, while the UK, taking the opposite side, threatened with a veto for more than one hour demanding additional sanction against Russia, Greece’s Foreign Minister said Speaking after the end of the Foreign Minister’s extraordinary meeting, Nikos Kotzias, at the head of the Greek Ministry of Foreign Affairs for only two days, also praised the negotiating ability of High Representative of the European Union for Foreign Affairs and Security Policy Federica Mogherini, noting that yesterdays seriously amended resolution was a result of diplomatic efforts that took place the last few days.

He noted that the Resolution was amended so that Greece is satisfied with it, mostly because it does not contain new sanctions but only extends existing ones and this only until September and not until December as was originally planned.

Minister also underlined that Greece no longer simply accepts what others in the European Union are preparing but has it’s own opinion and ideas in order to better promote the interests of both Greece and the European Union.

Greece kept a constructive and positive stance, EU Representative for Foreign Affairs and Security Policy Federica Mogherini said in Brussels on Thursday following the extraordinary session of the EU Foreign Affairs Council.
Mogherini said that two days ago she had called newly-installed Greek Prime Minister Alexis Tsipras to congratulate him and discuss the agenda of today’s Council. She also expressed her satisfaction over the speedy formation of the Greek government. She also said that at the Council, Greece’s stance was constructive and focused on retaining the EU’s unity.

She said that the “particularly positive stance” of Greece allowed the reaching of a compromise solution that was substantial and credible.

The foreign minsiters decided to extend to September the first group of sanctions on Russians and pro-Russia separatists in the Ukraine. See our Earlier story

Embargo, visas and Russian travel to Greece : a crisis, “diplomatizkaya” by all means…

Originally posted on moodhackerblog: Expectations for exclusion of the Greek exports from the Russian embargo expressed by […]

The Ministry of Foreign Affairs in Greece officially denied by declaration “the unsubstantiated claims of the Financial Times article published on January 28, refering on liaisons between the new Foreign Minister Nikos Kotzias and the Russian professor. Aleksandr Dugin. The Article writes the bogus claim that Mr. Kotzias had invited Mr. Ntougkin to an academic event of the University of Piraeus”.

“As, also officialy, the Piraeus University, by its part, has denied such claims by a separate announcement, published by its Academic credibility and accuracy, Mr. Kotzias never invited Mr. Ntougkin for any speech, and never. as falsely stated in the article, went to Moscow to meet him.”

“The article states also falsely that an official declaration was sought by the authors, and that was denied or never made from the Greek Foreign Affairs Minister’s side”.

“We notify that the Elementary, even, level on the Ethics of Journalism requires the crossmatching, intersection and verification of facts and arguments before publication, especially of such unsubstantiated information, which succeed , though, to be reproduced on the internet and other media, creating false and unwarranted impressions”

It seems like the audience finally knows who is performing for fake. The Greek population since the start of the Crisis has experienced a deliberately dirty play of minds on what is the truth and what is the lie. Plus, the Greeks have been the victims of the Most wrong and Non-ethical communication that should be addressed to a nation in Crisis.

“Mr. Samaras you can never win Tsipras”, said bravely Nikos Hatzinikolaou on his air show on Real Radio Tuesday morning, strongly denouncing the ex-prime minister’s practices of the Pre-election period of trying to terrify the public and on the same moment denying any press interview or debate before elections, at least to support his arguments , Hatzinikolaou said , that Tsipras is “so dangerous for Greece”
“Mr. Samaras , the Right party voters in this country have had leaders that were such gentlemen” , he added, commenting…

Alexis won the Greeks in the Heart. After five years of martyric tolerance on humiliation of the most Strict and Apathetic governmets that brought everybody’s mind, and day, to the bottom line, they said, undouptedly, NO to the Fear Factory that has kept them nerveless till now… Is it that Greeks have been tugged beyond their limits?
On the same moment, Apathetically at most, the ruling austerity government of Mr. Samaras, straight and clearly decided to invest in the Fear Attack to achieve to vote manipulation of the devastaded Greek mass, and unfolded an Unshamely Producted Presentation,
But  could this Political Science of decision-capture have won the results ?
And if yes, Is it Ethicaly correct as a Communication Act towards a nation ” in Crisis?

A plane is flying. In the cabin, the… 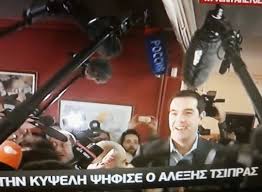 Cyprus’ national carrier has ceased operations after an EU decision it must repay over 65m euros  in illegal state aid.

The EU Commission said the Cypriot government had breached rules on support for struggling companies.

Cyprus Airways has repeatedly received aid between 2007 and 2013.

The government, which owns 93% of Cyprus Airways, had searched unsuccessfully for outside investors.

“The company has ceased being a viable entity, and cannot continue to operate,” said finance minister Harris Georgiades.

He said there would be alternative arrangements covering Cyprus Airways flights from Saturday.

The Commission undertook an in-depth investigation after the government in Nicosia approved repeated state aid packages to the airline.

Publishing the investigation’s results, the Commission was highly critical of Cyprus Airways’ restructuring plans. It said they were based on “unrealistic assumptions”, failed to address the cause of the airline’s difficulties and were taking longer to implement than EU rules permitted.

Under EU rules, struggling companies can be given aid under what the Commission terms the “one time, last time” principle.

Governments may grant a one-off tranche of aid to support a restructuring process once within a period of 10 years. The rule is intended to prevent companies becoming reliant on government support and gaining unfair advantage over rivals.

“Cyprus Airways has received large quantities of public money since 2007 but was unable to restructure and become viable without continued state support… injecting additional public money would only have prolonged the struggle without achieving a turn-around,” EU Competition Commissioner Margrethe Vestager said in a statement.